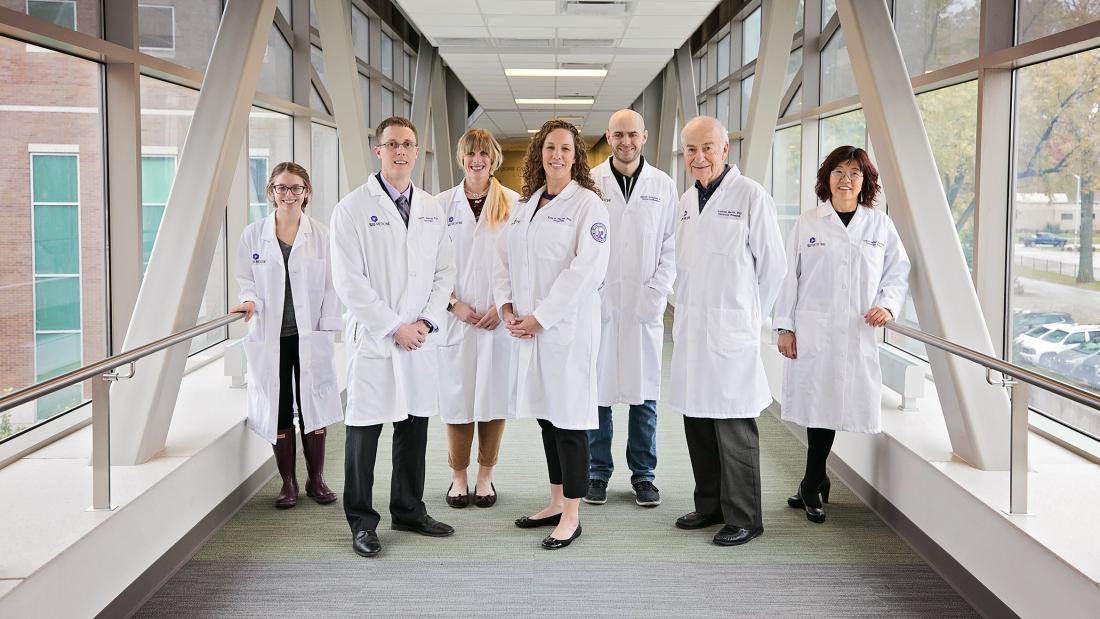 November 14, 2018
Alzheimer’s is a devastatingly progressive disease that robs our loved ones of their memories and personalities. Presently 5.7 million Americans are living with Alzheimer’s. By 2050, this number is projected to rise to nearly 14 million. Early and accurate diagnosis could save up to $7.9 trillion in medical and care costs, according to the Alzheimer’s Association.
There is increasing evidence that Alzheimer’s disease lies on a continuum with dynamic neurobiological and pathological symptoms. As the disease progresses, targeting specific therapeutic windows for intervention may give patients the greatest benefit. Several studies have implicated glutamate dysregulation in Alzheimer’s disease pathologies in the brain. The glutamate system influences synapse formation in early brain development, synapse maintenance and synaptic plasticity.
A laboratory team led by Erin Hascup, PhD, assistant professor in the Departments of Neurology and Pharmacology at Southern Illinois University School of Medicine, has been awarded two grants totaling $6.33 million from the National Institute on Aging (NIA) of the National Institutes of Health (NIH). The group has shown that glutamate dysregulation is likely occurring prior to cognitive decline.
Hascup’s team will study how glutamate neurotransmission changes over the course of Alzheimer’s disease progression. Co-investigators Kevin Hascup, PhD, Neurology, Neurosciences Institute and CADRD, and Kristin Delfino, PhD, Center for Clinical Research, are contributing to the research. A $2.95 million grant will support experiments to explore how specific protein changes cumulatively affect glutamate levels and brain activity. Dr. Hascup believes this new data could produce useful early biomarkers and therapeutic targets for fighting Alzheimer’s.
A second grant award of $3.38 million from the National Institute on Aging will fund studies of cellular aging, inflammation, neurotransmission and cognition in Alzheimer’s disease. Andrzej Bartke, PhD, professor emeritus and director of geriatric research in SIU’s Department of Internal Medicine, will join the team on those investigations.
“Alzheimer’s disease progression presents a moving target, so finding the timing for therapeutic treatments is critical,” said Hascup. “If we can reduce the burden on aging cells and shift how they tolerate inflammation, it may help to slow or prevent the cognitive decline seen in patients.”
In addition to its research focus, SIU School of Medicine operates the Center for Alzheimer’s Disease and Related Disorders. Since 1987, its staff has diagnosed, treated and educated Illinois residents with Alzheimer’s and other dementia-related problems. In the past year, the center, along with its Memory and Aging Network, has served more than 4,000 patients and their families.
Online Patient Portal
1-800-342-5748